How to get utility for your art NFT at BWS Resort!

We recently released a new exciting roadmap as we planned Avalaunch IDO for BWS on Australia day 2023!

At the moment, we are focusing on offering users the best vaults that Defi has ever seen, but as soon we generate enough fees to scale the rank well on https://cryptofees.info/ will switch on the underlying economy for BWS resort ( currently in alpha).

And that is where we can offer utility to like-minded NFT Utility projects through BWS Wars!

The BWS Resort acts as the game interface for BWS Labs. As you can see, each building leads to a vault where you can directly interact with other projects like GMX, Dopex, AAVE, Beefy Finance, Hubble, Colony, Avalaunch, Benqi, or TraderJoe. Instead of opening several browser windows (and ensuring your wallet is on the correct chain), we streamlined bridging and cross-chain processes to be as simple as walking to a different building inside a video game. This is a direct application of how GameFi can simplify and add ease of use to DeFi. It’s also possible to use (and earn) BWS Tokens from inside the BWS Resort. 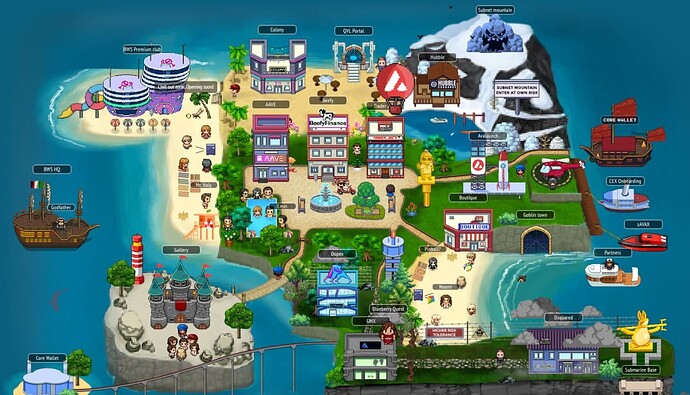 A game wouldn’t be so fun without some actual PVP now, would it?

The BWS Resort is divided into 12 Contradas (Italian for clans). Users each choose one Contrada to represent and fight to increase the ranking of their Contrada over the course of 3 BWS War Games (as in the Hunger Games movies).

BWS War Game 1: 12 teams compete in games through the resorts, while 4 earn rewards and move forward.

BWS War Game 2: 4 teams compete in games through the resorts, and two teams get rewards and move forward.

BWS War Game 3: 2 teams compete in games through the resorts, and 1 team wins and earns the giant pot!

7.2M $BWS Tokens (2% of the total vested supply). Each successive BWS War Game yields greater and greater rewards (more details on how to participate will be broken down in a successive article).

If this wasn’t already exciting enough (drumroll….) BWS Wars will also be live-streamed, and members of the BWS Premium Club can place their bets! Even spectators can profit from all the action!

With BWS Labs, you aren’t limited to earning with boring, run-of-the-mill Staking Models. Our ethos is to make investing funner, safer, and more profitable to the average DeFi investor, and the BWS War Games is one of the avenues we chose to actually make earning yield engaging!

Bring your community to check out the resort and vaults and stake their NFT in our platform to earn base BWS yield. There will be a leaderboard where a community with more users/vaults TVL will be whitelisted to compete in BWS Wars.

Hi Luca, this is quite cool.